I walked through the resort quietly. Maybe not so quietly. It was Wednesday night, and with the accoutrements dangling from my backpack, I jingled around the pathways. I can’t remember if it was 2010 or 2012 that we stayed here for Celebration. I suspect 2010. I suspect it because I remember we were drinking.

I remember where our room was. Sort of. The resort is under major construction now, so I can’t be sure. But I walked by every place I thought it could be. Through the lobby, through the restaurant and to the left. We went to Cocoa Beach first on that trip, and stayed in a cheap hotel in a crappy room. When we arrived at this place on Thursday morning, I remember we just flopped onto the bed which seemed so luxurious. There was a mini fridge, and we packed in the alcohol for the trip. I was raring to get over to the convention center, and Adam was like “Just give me five more minutes in this air-conditioned room on this bed.”

The moon was out as I walked the paths in 2017. The celebrations merge together in my mind, but I remember this one because we annoyed the doormen by choosing our own taxi instead of waiting for them to call up the next one. The taxi driver gave us his number and he drove us anywhere we wanted that trip. That one night it was to the Funky Monkey, where they just happened to have one table left for the Star Wars drag show.

I’m looking at some info now, and I see that Ian McDiarmid’s first celebration was 2012 in Orlando. We would have gotten the Emperor’s autograph. I wonder now, a year after we first realized he was sick, was he already drinking that much again? Were we limiting it? Had I become his mother along with his wife, frightened, but giving “permission”? Am I conflating my memories? I might be.

Without Adam, I didn’t get up at 4:30 a.m. to stand in line for panels now. I suspect that Adam would have agreed with me about that.

On Friday at the con this time, I wandered the Art Show area. Adam and I loved this part of the celebration, and we would wait for a particular limited edition print to jump out at both of us … one we had to have. I remember the last time there weren’t any we both loved.

This year, I was almost through the gallery, disappointed that there were so few Rogue One prints, when I came upon this one. I said to the artist, “I always walk around waiting for the one to jump out at me, and this was it.” He said “Can I ask why?” I said “Do you want to hear a short and sad story?” “He put his pen down and gave me his full attention, as I explained how Rogue One figured in our fight for Adam’s survival, how “I am one with the Force, the Force is with me,” was so important for me.

He cried, he hugged me. He later asked for a selfie so he could remember my story. He said that I was the second person who had come to him sharing that his artwork had meant some sort of survival, or friendship, or gratitude On the poster, he signed “The Force is with you … both.” He asked to hear Adam’s name.

Here is the poster. I dedicate it to all of you as well. 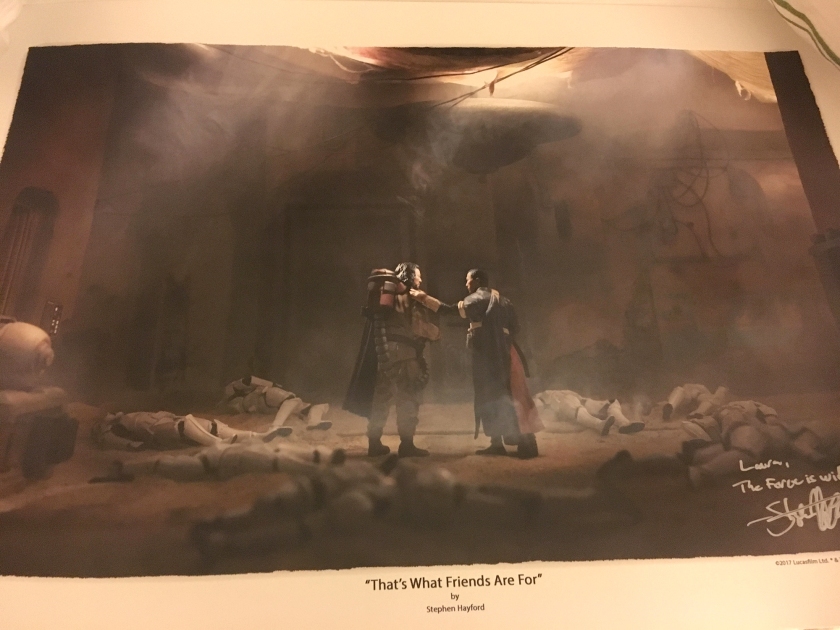