Bixby has not always been in our lives. Our first dog was Bailey, a boxer/pit bull we picked up back in about 2003 outside of Petco. We had dog fever. We had been looking for a dog but had ignored Bailey on the websites because she was listed as a pit. Adam called me at a football game to say he had found the perfect dog. He convinced me to get over my irrational fear of pit bulls. One of the best decisions ever. Bailey was our baby. She wasn’t the perfect dog … we had to learn to be better owners due to her often-unpredictable behavior. But we are glad we learned.

Meka came into our lives two years later. Meka was Bailey’s best friend, and when Steve had to move away and didn’t think Meka would fit in an apartment, we gladly took him in. Bailey and Meka lived happily until Meka passed in 2011. Bailey died in October 2014, and our hearts were broken. It was one of the few times I had seen Adam cry. We held each other for awhile, celebrated her life with friends.

I wanted another dog a few months later. We had Chance the cat, but I wanted to give another dog the chance at a great life. Adam wasn’t sure, but I joked if he didn’t get me a dog I would want a baby. Ha ha! On Jan. 4, 2015, we welcomed Bixby into our lives from OutPaws Rescue in Denver.

Bixby became The Bix. Da Bix. The light of our lives. He is the perfect dog. He is struggling with anxiety now with the changes in the house, but every day he is calmer.

As Adam struggled with his depression and anxiety over the last year or so, Bixby was a solace. He napped with the Bix. He talked to the Bix about his pain. I heard him once when he was out of it and didn’t know I was in the room (had he been drinking? was it the Xanax? was it brain confusion from his disease? I don’t know). 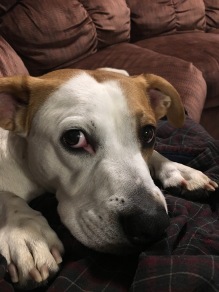 When we knew Adam was not going to make it, I begged the docs to allow someone to bring Bixby to Denver. I thank Dr. Abigail Lara and Stephanie the nurse from the bottom of my heart for agreeing to look the other way and sneaking Bixby up the service elevator. I cannot thank Mike Carsten enough for leaving home immediately to pick him up and bring him.

Later, Adam said I was quite sneaky for getting Bixby in. He smiled. Bixby sniffed him goodbye.

Bixby is why I need to make it. I can’t let Adam down.