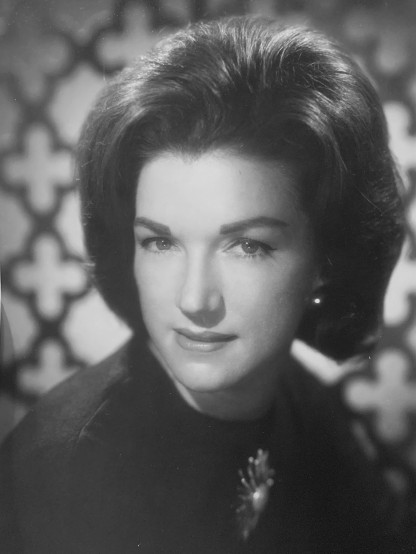 We are heartbroken. Our beautiful mom, Jeanette, passed away Tuesday evening after contracting both flu and pneumonia at Christmastime. She was 86.

Our mom was the steadfast center of our family, a smart, funny and caring woman. One step into her house, which she nurtured for nearly 50 years, shows what was most important to her: family. She influenced the world through love and friendship, sending two pretty awesome daughters out into the world, and being a role model for them and her granddaughters.

Mom was born in San Francisco on November 3, 1933, the middle child of five with two older sisters and two younger brothers. She graduated from San Francisco’s George Washington High School in 1951 and shortly thereafter moved south to Pasadena. She received her AA degree at Pasadena City College and her business certificate from the Sawyer School of Business. While a student, she worked part-time at Bullocks on South Lake Ave where she wrapped gifts. Oh – her packages were so beautiful! The best part of every Christmas was seeing her creations … not just what was inside the box. While she was in the hospital, she talked about her time in Pasadena as a young woman, saying “we had a good time.” If she could have winked, she would have.

She worked for the Santa Fe Railroad and the Pasadena Independent newspaper before taking a job as a secretary at Aeronutronic in Newport Beach. In 1961, became a secretary at Jet Propulsion Lab where she met and married our dad, “retiring” in March 1967 when she became pregnant with Barbara.

Mom then devoted herself to being a housewife and mother. Ours was the house on the cul-de-sac where all the kids gathered to swim and play, and there was always a hot queso dip and chips ready for hungry school children. She bowled, played bridge and attended all of our sporting and social activities.

In 1983, she returned to work at Verdugo Hills High School as an attendance clerk, where she was always available for her daughters when we needed something. At least that’s what she said. We know she just wanted to keep a close eye on us. Though her presence did come in handy when Barbara wanted to go off of our “closed” campus for lunch at Tommy’s (Laura claims she never wanted to leave campus… what?!?). She continued working for years long after we left, finally retiring in 1998 to spend time with dad.

We know she loved us (her daughters) and was proud of all we did, but her heart became even fuller with the birth of her granddaughters, Ava and Colette. A devoted grandmother, Jeanette loved spending time with them, joining us for every concert, recital and dance competition she could – including trips to Nationals for BOTH girls in Las Vegas. She made the long drive to Orange County on a regular basis and stayed with us so she could enjoy their company. She wanted to be tagged in every social media post concerning them so she could share her pride with all of her friends.

Mom loved her soap operas and was sad when All My Children went off the air. No more Erica Kane! She continued watching General Hospital right up until the day she was admitted to the hospital.

She loved figure skating, Roger Federer and musical theater; she was a season ticket holder at The Pantages for more than 25 years. She had an extensive magnet collection. She loved light beer – one with dinner every night – and fried fish. Her favorite movie was “The Tales of Hoffmann,” but she also loved pretty much all romcoms. She looked forward to both the annual holiday gala and the holiday buffet at The Athenaeum at Caltech every December and enjoyed treating family and friends to an elegant meal.

She often downplayed her intelligence, but we were really proud of the way she took control of her life when dad got sick and later passed away. At the age of 80, she learned how to run every aspect of her household and finances, mastered her computer and managed to mostly figure out her iPhone. Waze, however, perplexed her. We will miss her riding shotgun and asking us if we know where we were going.

She never looked her age and rarely left the house without makeup, hair and proper accessories. Gosh, she was beautiful. Of course, all that beauty took time and it was a running joke that if we wanted her to be out of the house at noon, we needed her to start getting ready at 9 a.m. Not an exaggeration. We hope that we have those same good genes!

Thank you to our family who visited and checked in over the last week. We may not have responded, but we appreciate the effort. We love you. She loved you.

There will not be a funeral, but we do hope to host a party in the near future to celebrate her life.